Elite Laser Tag Equipment offers the world’s most advanced software features specifically designed to generate a high Return on Investment (ROI). We focus on features that were specifically designed to enhance the player experience without complicating the operation of our equipment. We call our system “Revolution” because it goes against the grain of all current laser tag manufacturers tactical or indoor by focusing on reliability, flexibility and simplicity with software that is controlled 100% on a single straightforward monitor or laptop screen.

A system designed with not only the player, but the Laser Tag operator in mind. Full featured, intuitive and clean design.

It’so simple that you may never need support, but we are here for you if you do. 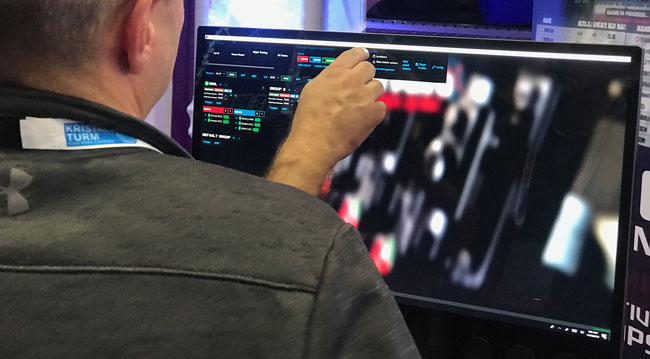 A trainer-installed program that runs on any Windows 10 laptop with Intel I-3 processor or above. Please note Elite equipment also has the ability to run fully featured without the need of a software platform, though it will not have all the features available to the full Revolution system with the added Game Management Software (GMS).

Simple Windows Laptop Using Intel I-3 or Above
Critical for Mobile Operators!
The software does not require an expensive laptop that has tons of resources and memory. The heavy lifting of the software is at the tagger level with each tagger having an independent processor.

Multi-Monitor Enhanced Game Display for Real-Time and End game Viewing
Can work with up to 6 separate monitors or screens for Team Viewing Monitors and Scoreboards and End of Game Scoring. (Just Requires HDMI outs and TV Screen or Monitor for each additional Screen)

No Wifi or Internet Needed
Critical for Mobile Operators!
A Simple USB 2.0 plug-in Rf control unit powers the Elite taggers and props through our software. All hardware is simple plug and play, with full self-authentication and hardware detection. Our Rf Control unit has a diameter of 800 ft of range. Mobile operators must have the ability to just unpack and play. A mobile operator does not have time to hunt and search for internet and wifi to conduct awesome parties.

Auto Store and Go Feature
Critical for Mobile Operators!
The software has a full, auto-storing software feature for programming and saved games, allowing you to, “close and go” to your next location and just, “open and play” at your new destination.

Lockdown Setting
The software is password protected allowing you to play without staff adjusting your features. After the system is programmed the owner can lock in settings and taggers in gameplay so employees can only start or end game. A manager password is needed to access and change settings and preset games.

Ping Feature
This software feature allows you to ping each tagger and get the taggers’ live status. This includes tagger name, settings, id number, actual player name, team, battery status, and what group the tagger is currently assigned to.

Group/Tagger Assignment
The software has holding areas called Groups. Multiple Groups can be active and playing simultaneous games allowing you to control various battles or battlefields at the same time, allowing you incredible flexibility.

Private Group Names
The groups can be privately named and saved to whatever name you choose.

Four Separate Teams
The group can have up to 4 separate teams in it.

Group Dedicated Referee Commands
Each group has dedicated referee commands to control this single group of taggers. These include New Game, End game, Micro Group Ping for status checks on all taggers.

Group Dedicated Self-Diagnostic Commands and Static Checks
Rf self-diagnostic check to make sure RF is fully functional in each tagger or the entire group.

Group Dedicated Command Area
Each group has a separate command area for their combat team. (Alpha, Bravo, Charlie or Delta) Each team command area has the names of all of the taggers, names or player names, and the tagger number for easy identification, and status indicators that show what prebuilt game is currently selected.

Group Dedicated Battery Level Status Indicators
The battery level and status of each tagger is displayed next to each tagger name. Allowing you to see what your taggers battery levels are in real time with no surprises that can lead to costly refunds and poor reviews.

Group Dedicated Team Sorting and Color Coding
Teams are by color and within each group, toggled individually or as a group to turn on or off to receive independent commands.

Group Dedicated Player Roles
Each player or all players can be assigned special classes like:
Medic which has a particular timed self-heal and Healing Shot that can heal other players.
Tank which can put a level Armor that mitigates damage from other players based on the armor level.
Infantry where players get a timed sniper one shot one kill round every 30 seconds and a self-heal over 20 seconds added to the already powerful pro battle rifle.

Group Dedicated Special Weapons
Each player’s weapons can be preassigned or have special weapons pre-populated into the game.
Group Dedicated Player Handicapping Roles
Players can be assigned as a Rookie, Veteran or Elite level player with bonus or restrictions to help balance play and make it fun for all.
All-In-One Gun System
Any tagger can instantly become a Player Tagger, Referee Control Tagger (Ref), or Game Editor Tagger (Editor). Simplifying your business and reducing your start-up costs.

Powerful and Intuitive Programming
Software so powerful and user–friendly, a 12-year-old can operate every aspect of the game, giving you the freedom and flexibility to generate a once in a lifetime gaming experience.
Real Time Scoring
Real-time scoring, just like a video game. Check, kills, ammo, accuracy, who’s winning, team lives, team deaths and many more feature-packed stats, both on the tagger and the game kiosk, shown live as you work to accomplish your mission!

In-Game Handicapping (Skills)
Revolution has the power to change any tagger at any time for improved game balance. The Referee Mode has features like Stealth Kill, Weapons Jam, or Stun so instant team balancing can be subtle while protecting the overall experience.

Unlimited Game Types
Thousands of guns and game types can be configured and broadcasted to the battlefield in seconds, limited only by your creativity.  Powerful programming allows you to save your favorites and transmit them to any player, team or battlefield with a simple radio command.
In-Gun Game Management System
Every Elite tagger can be managed before, during, and after the game by being switched to Edit Mode or Referee Control Mode, giving you the power to change any variable of gameplay, and all the Referee tools to manage the missions.

Arcade Mode
It allows you to toggle your equipment from Real Mil-Sim (military simulation) to Video Game Play with the click of a button on the Game Master Controller. Many younger people love the killstreaks, but hardcore Mil-Sim lovers prefer the game to be as real as it can get. Arcade Mode gives you the best of both worlds. Arcade mode allows you to utilize the kill streaks feature with in-game messaging by sound or display. The message can be configured for kids or adults. When a player is eliminated, the tagger gives instant hit feedback. As you eliminate players, points are earned. Arcade Mode is impressive and fully immersive, just like your favorite video game.

Zombie Mode Live
Elite Zombie Mode Live is a fully interactive and immersive gaming experience. Players use locators to find their way to checkpoints while
avoiding being eaten by three unique types of zombies. Players can level up their weapon as they reach checkpoints and defeat interlinked and fully automated sentry pods that shoot back. When the sentry pods are deactivated, players will receive powered up weapons until they are disabled and have to go back to the Medic Respawn Station. The entire game allows interactive, nonlinear gameplay on massive battlefields or sets all with live scoring! Requires multiple Game Box 2.0 and a little setup.

Completely Autonomous Gaming System
Elite Laser Tag equipment is an entirely self-contained gaming system, meaning everything you need to run an incredible gaming system is right inside the gun. Designed by some of the best engineers in the industry, our equipment has a powerful 8-core processor propelling every weapon, matched with a super–powered RF radio. Our system is revolutionary and a simple solution to power up your business.

To purchase Revolution Game Management software, please contact your local Sales Representative. (See contact information at the bottom of this and every web page.)

Purchase all of your parts and accessories in our NEW Online Store! Online orders limited to one (1) tagger. Please see your local Sales Representative (contact info at bottom of every page) for laser tag packages, or to order our Game Management System software. Dismiss